A few weeks ago she posted about a monthly quilt photography link up. 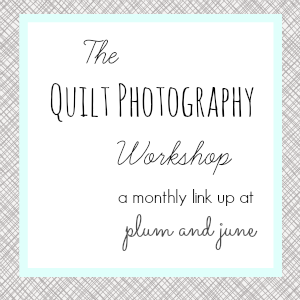 I'd really like to improve my photography skills so I plan to at least try to do the assignment each month. The task for August was to take pictures of some fabric. 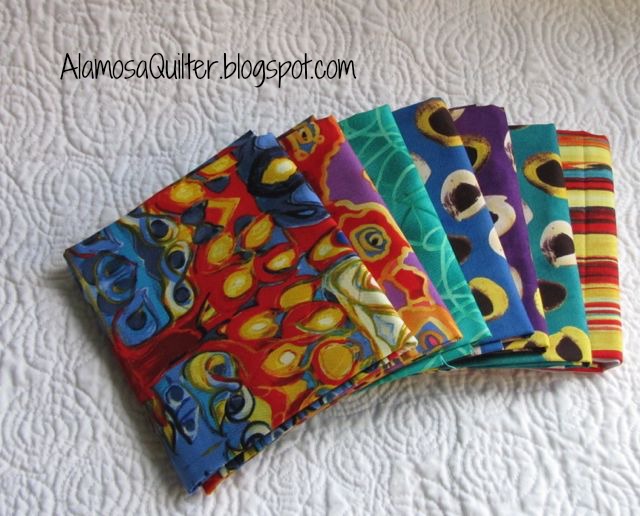 I usually take blog pictures in my sewing room. The room has one window and is east facing. Through trial and error I have discovered that taking pictures in the afternoon on the table right in front of the window is best for small items. Design wall photos are a challenge and I hope to learn how to improve those through this process. 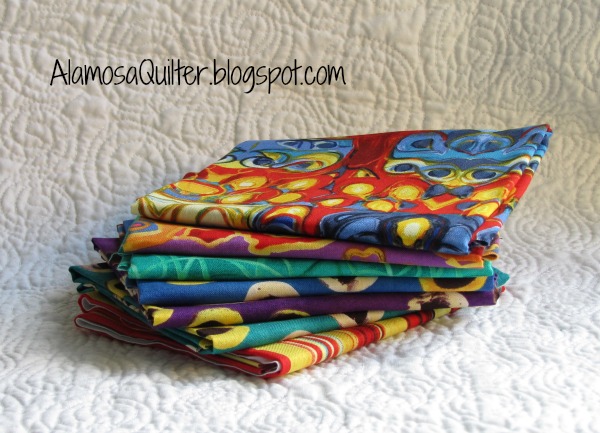 I took 35 pictures and played with ISO, Brightness, Shutter speed and White Balance. I had to download the manual for my camera to figure out how to adjust these things. This is the first time I have used the P mode on my camera and the Av, the Tv and *gasp* the M (which stands for manual) modes. Usually I just use AUTO.

My camera is a Canon Powershot SX 20 IS. I did not get artsy with the photo shoot. I just grabbed a stack of fat quarters out of my stash that looked good together. They might even be from the same collection. I use the back of a quilt as a backdrop draped over my HQ Sweet 16. I used a tripod for most of these photos. 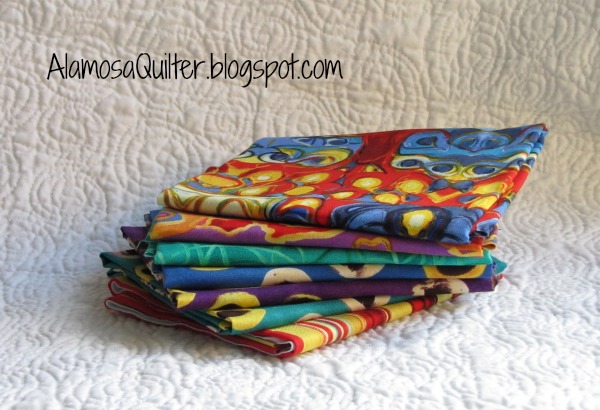 Shortly after the boy was born I checked out a photography book for moms out of the library. What I learned from it are (1) turn off the flash; (2) take lots of pictures; and (3) turn off the flash. This was actually listed several times in a list of tips in the book. I got the hint. The other things were to pay attention the background so you don't get a strange something sticking up from your child's head in the photo. Outside pictures are best. And dress them in solid colored clothes for the photo shoot. This was a great book for taking pictures of your kid, but now I take many more pictures of my projects than my kid.

I also have the book "The Crafter's Guide to Take Great Photos." I have read this book from cover to cover! It has been very helpful. Reading this book taught me the importance of a good backdrop and various ways to position one. The book contains lots of other great information. One of the things I really like about it is that the author urges you to explore what your current camera can do rather than trying to sell you a more expensive one. It also contains information about accessories you can make to use with your camera from pretty basic items. The items you can purchase are also listed, but I really appreciate the information of how you can make similar things that will work from stuff you already have. I have a Mac Book so I edit my photos with iPhoto. I try to take a good picture to begin with so that all it needs is cropping and resizing. I recently discovered PicMonkey, which allows me to add text to my pictures. This is the one thing I really need that iPhoto doesn't do. Luckily, PicMonkey is free and allows me add text. All of the photos in this post were cropped, resized and text added with PicMonkey.

Then I started playing around with some of the other things PicMonkey can do.

Go here to for the link up to see how others did this month. I'm looking forward to next months assignment!

Email ThisBlogThis!Share to TwitterShare to FacebookShare to Pinterest
Labels: photography

I have finished all of my Metro Medallion blocks! 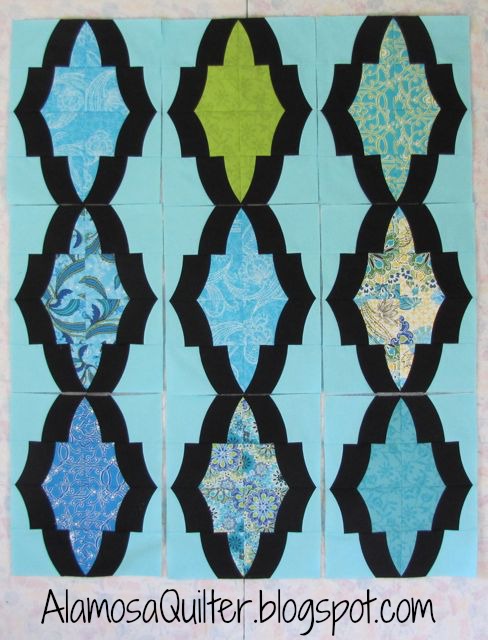 I know that there are only 9 blocks in the photo. You'll just have to trust me that all 16 blocks are complete. My design wall is full of other stuff right now so I only have room for 9 of these blocks at moment. I used 8 different fabrics for the medallions and you can see all eight fabrics in the photo above.

I'm trying to decide if I want to add the diamonds or not. I think it is pretty fabulous as is, but could it be more fabulous with diamonds?

I used a package of Honeycombs to try a new pattern, Hexagon Shuffle. 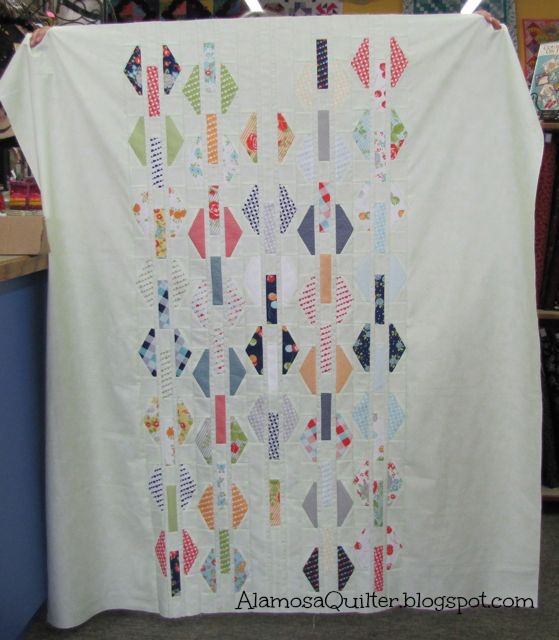 To get a copy of the free pattern for yourself and read about my experience making this top, check out the blog for my LQS, Heartstrings & Heirlooms. 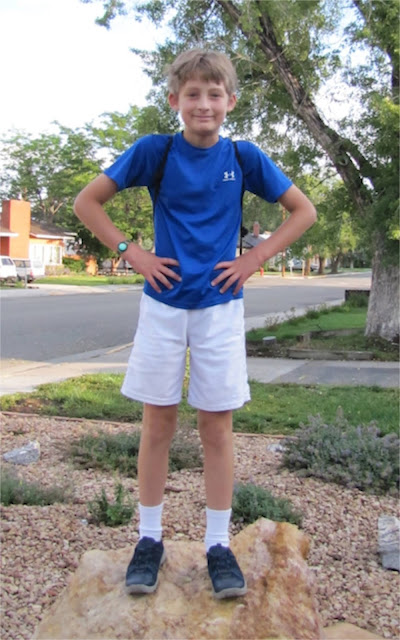 So despite having quite a bit of work to do yesterday, I did manage to get some sewing done too while waiting between tasks for responses from others.

My Scrap Group met on Wednesday. We made Scrap Basket Churn Dash blocks. 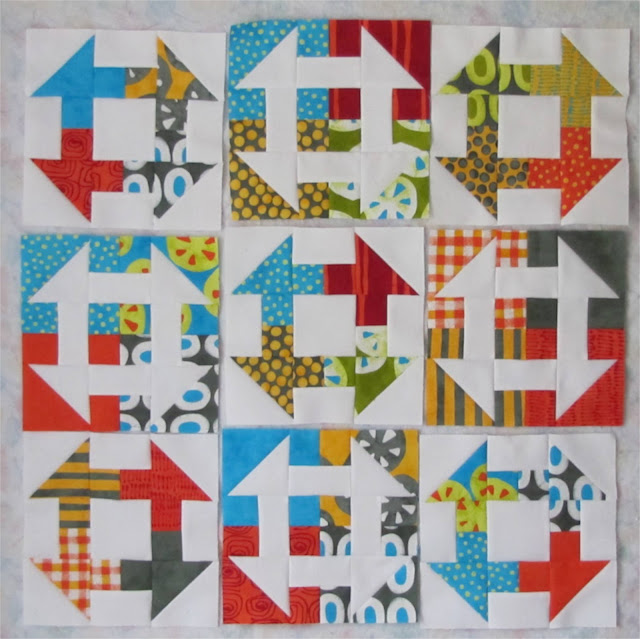 I have the pieces-parts for thirty blocks cut out. I managed to make a few more on Wednesday during class but I still have 14 more blocks left to make.

The idea for this months project came from the Happy Zombie. She called it Funky Wrench - Nuts & Bolts. I have always called this block Churn Dash, but Monkey Wrench is another name. I had to resize the pattern to use the 4" and 2" squares I have been cutting. My blocks will finish at 9" square.

I saw a video for a neat way to make flying geese "dance" down the row, instead of march in a straight line on the Studio 180 Design website. The technique is called Migrating Geese. This link will take you to the video. After watching the video, I purchased the technique sheet for this method. This link will take you to where you can purchase your own technique sheet. There are many other free videos on this website so you may want to look around.

After I have had a chance to play with this technique, I'm sure I'll blog about it again. One thing I like about this is that it does not require a fancy ruler.

Occasionally, (about once every 5 years) it rains really hard at our house. Yesterday evening it rained hard for an hour. When dinner was over the boy couldn't wait to get out and play in the water. 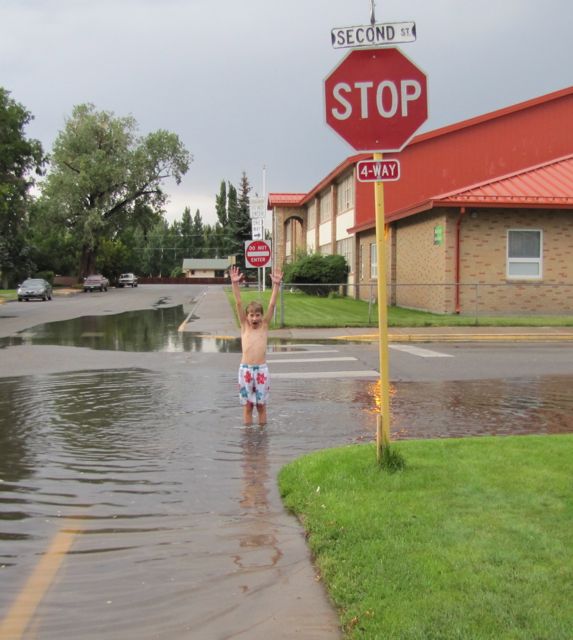 The street drains at this corner are slower than the other ones so this is the deepest part. 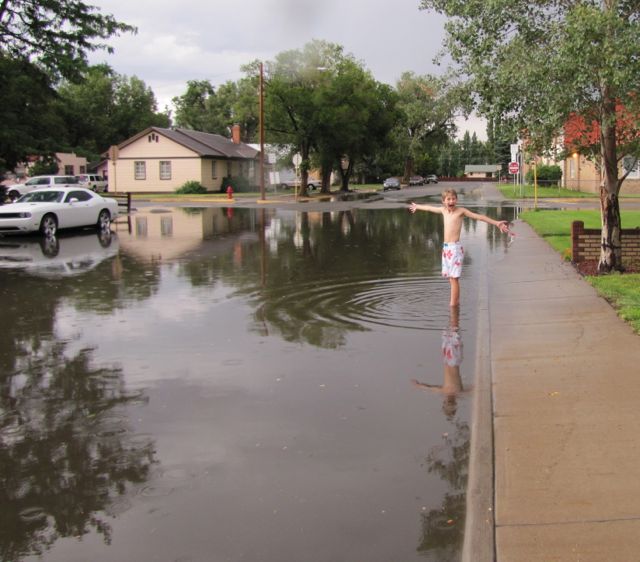 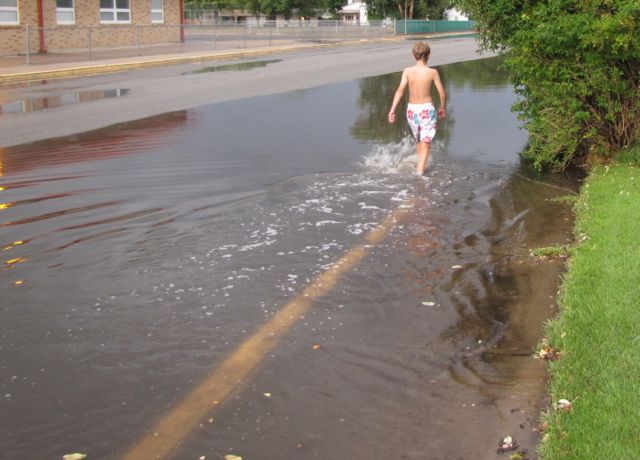 A big puddle is major excitement around here! (It's a small town and he is easy to please)

Visit from a Friend

We had another friend visit last weekend. She is a former neighbor. We spent the weekend doing as many of her favorite things to do when she lived here as we could.

We went to the Sand Dunes. 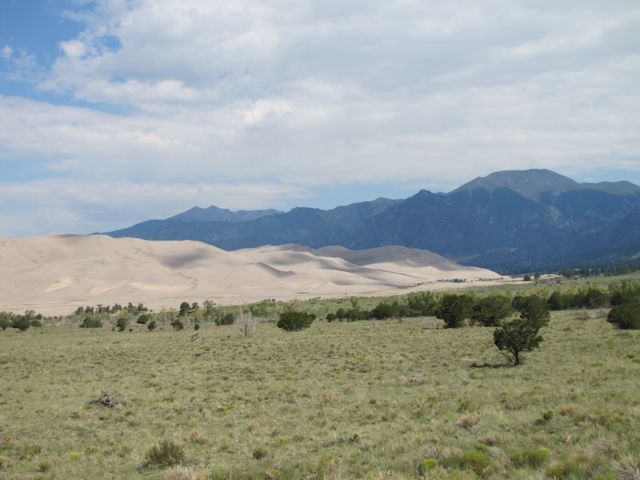 I love the shadows of the clouds on the Dunes in the above photo.

We walked a little ways out onto the Dunes. 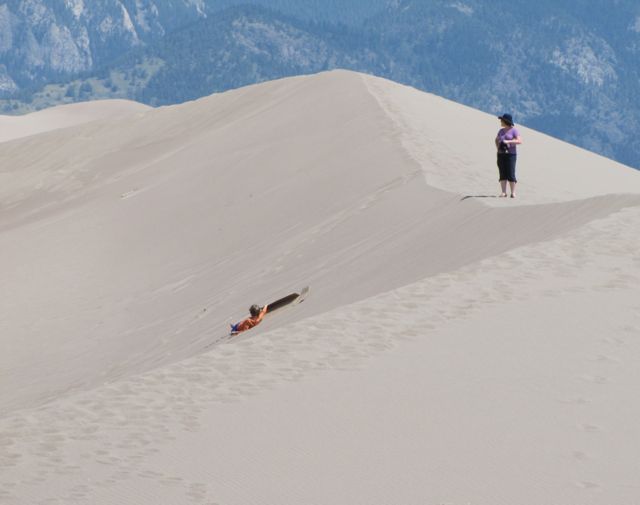 That spot of orange sliding down the dune is my child. 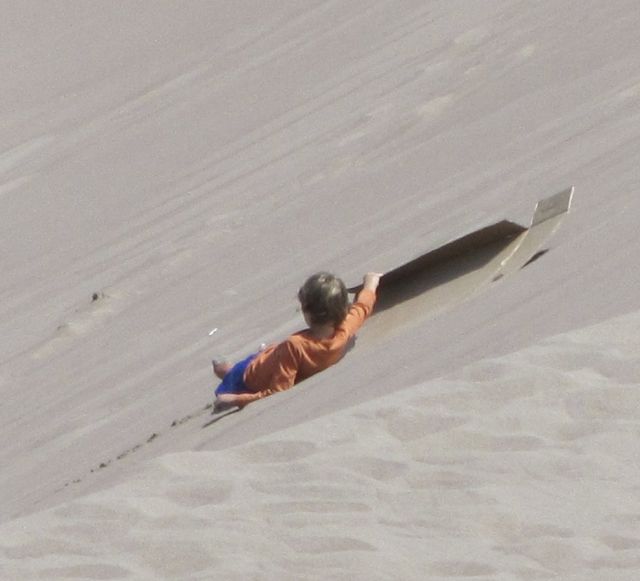 In the afternoon we walked around downtown Alamosa and shopped. We ate dinner at her favorite local restaurant, Calvillo's.

It was a short visit but very enjoyable. I suppose it is obvious that I didn't get any sewing done over the weekend. I'm working on my next scrap project this morning while waiting to hear back from folks for work projects. I've got to get enough of this quilt done today so I can write up some basic instructions for Wednesdays Scrap Group meeting.

Not a whole lot of sewing going on here this week. I got thirty blocks worth sorted and the background fabric cut for my next scrap group project. 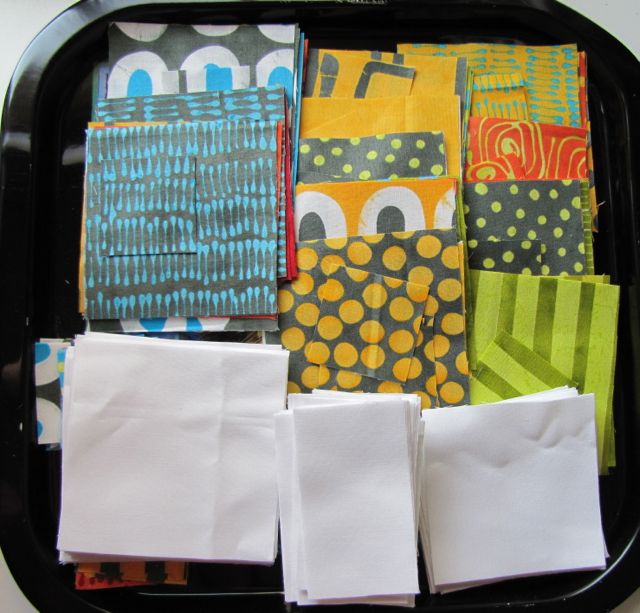 And I finished sewing the curves for my Metro Medallion quilt along. 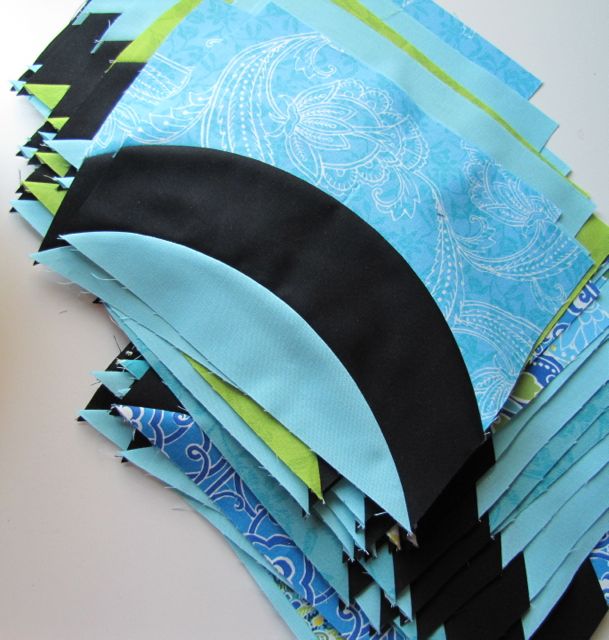 Most of these were sewn prior to this week  In this stack are all the sewn curves for 14 blocks. These need to be squared up and then cut and reassembled into the blocks. If you want to see samples of how these blocks turn out, I blogged about my first two blocks here.

Visit From a Friend

I had a treat last week - a blog friend, Stephanie of Peas in a Pod, came to visit with her family. They spent the night with us as they were passing through from southwest Colorado on their way to Denver.

We had such a nice time together! Our kids got along great and were the best of friends almost immediately. Our husbands even got along nicely and were engrossed in conversation over a beer by the time we got back from my LQS, Heartstrings & Heirlooms. 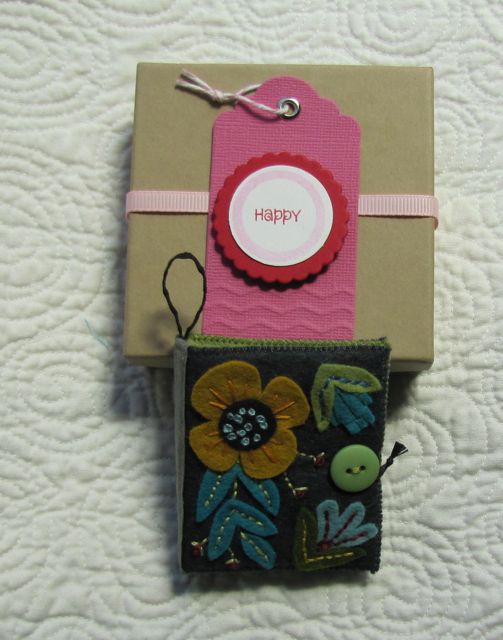 It is the cutest little needle book. 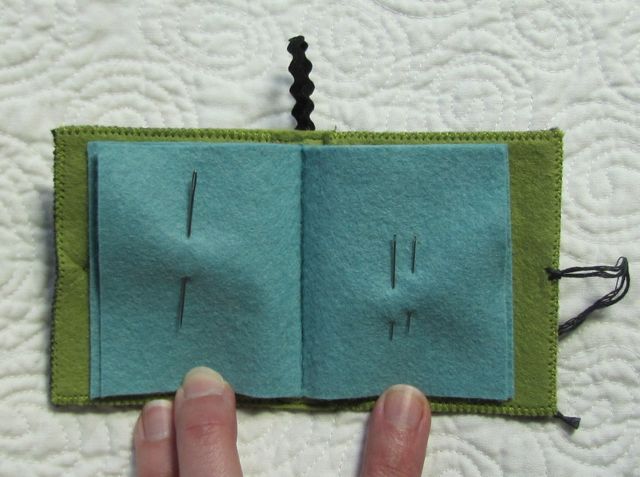 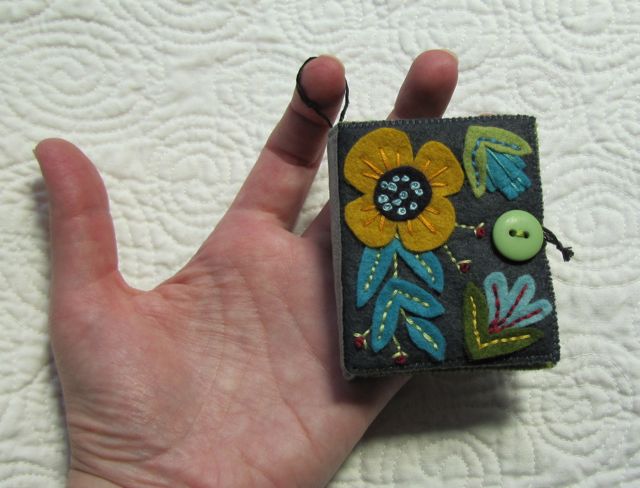 In case you want to make one for yourself or a friend, the pattern can be purchased from the designer through this link. She has a shop on Etsy and Craftsy. I'm probably going to get the pattern for myself because this is just so stinkin' cute! What great gifts for sewing friends these would make.

Posts may be spotty for the next couple of weeks. This is a super busy time for me at work. I have a lot of computer work to do over the next few weeks. If I do have time to sew, I may not feel like doing more computer work to write up a post and share it with you. I will take pictures and write posts about everything "blog worthy" eventually, but there is only so much computer work I can stand in one day. I hope you understand.

Curve It Up QAL - Block 8 Quilted 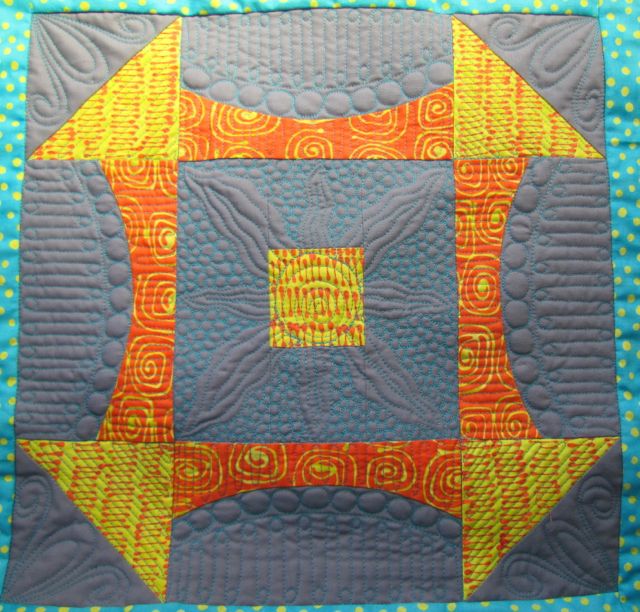 Even though I'm quilting each block differently, I'm trying to use the same elements in each. On this one though, I did something different in the center. I just felt like it called for something else. 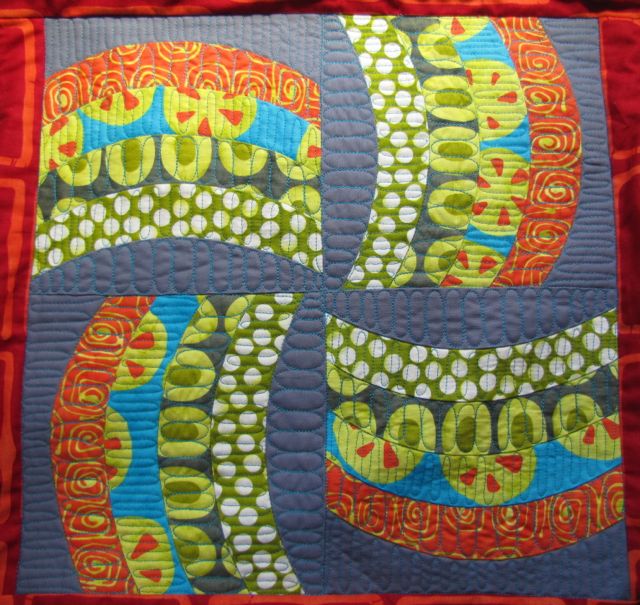 I learned the hard way on this block that lots of piecing on the back of dense quilting can make things difficult. There are a few wobbles due to lumps of seams in the backing. I'm not going to point them out and I'm not going to rip (because Jenny said not to). 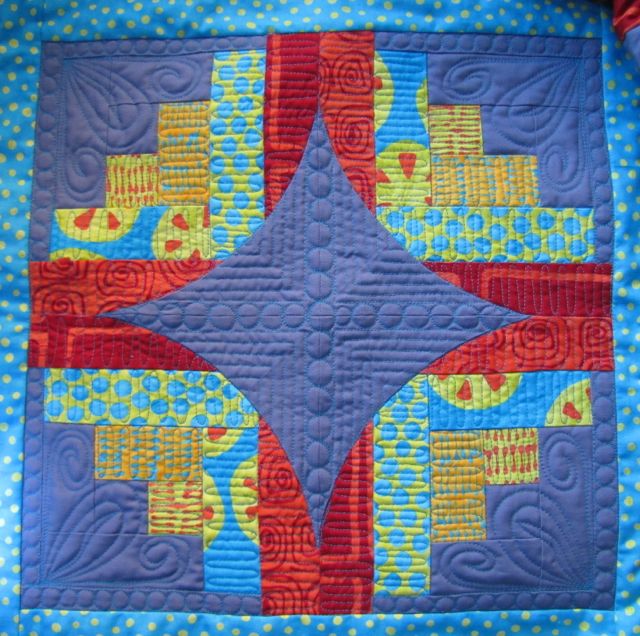 I recently discovered a way to make four patches that is a little different than the standard way of cutting four squares of equal size and sewing them together. This probably isn't a new method, but it was new to me so I thought I'd share.

Arrange the squares right sides facing and sew a 1/4" seam on two opposite sides.

Cut this in half parallel to the sewn sides.

When you open these up they look like this. Press the seams open or to the same fabric on each unit. I pressed toward the darker fabric.

Sew 1/4" seam on opposite sides perpendicular to the seams previously sewn.

Cut this in half parallel to the seams you just sewed.

When you open these out and press you have two identical four patches!

In the above two four patches, the seams will spin in opposite directions. If you need them to spin in the same direction then you have to fiddle with the first sewn seam when you sew on opposite sides the second time.

If you do this, then when you cut this in half your seams will all spin the same direction.

It doesn't make any difference on the front.

However, if you will be sewing together a bunch of four patches and would like the seams to be opposing no matter how you turn them, then doing it this way is necessary. I used this method to make the quilt below.

This is the second quilt I made from this kit. I ended up purchasing a second kit because I wanted to give the quilt as a gift but the first one is hanging as a sample at my LQS, Heartstrings & Heirlooms.