A good time was had by all!

I got my camera out but promptly lost it in my mess so I didn't take a single photo at the retreat! The pictures probably wouldn't have been that good anyway because there are too many windows for good pictures during the day and not enough overhead light for good pictures at night.

Here is what I accomplished:

I made the four blocks for my Flying South class sample. 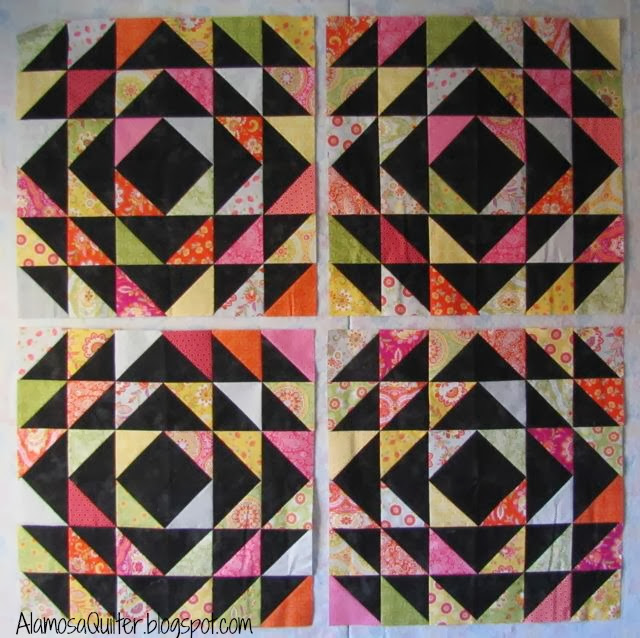 These blocks should look familiar since this is the same pattern I used for my last scrap group project. For this one I am using charm packs instead of scraps.

I made the first of twelve blocks for my next scrap group project. 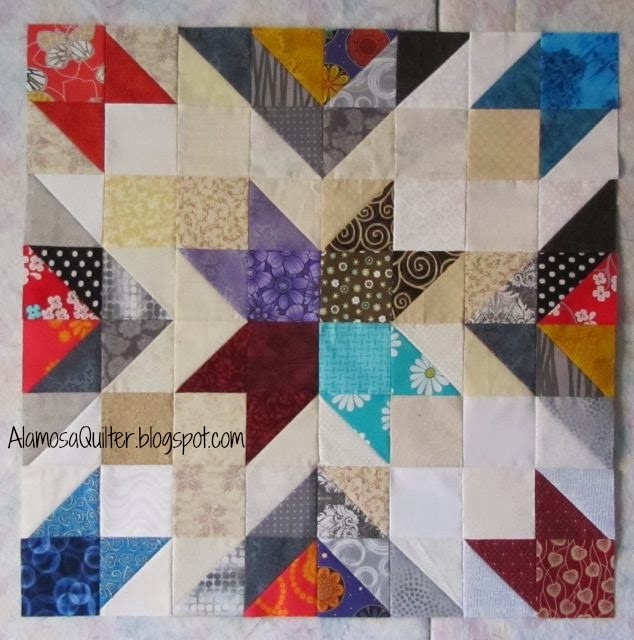 I made four Runaround Bags. 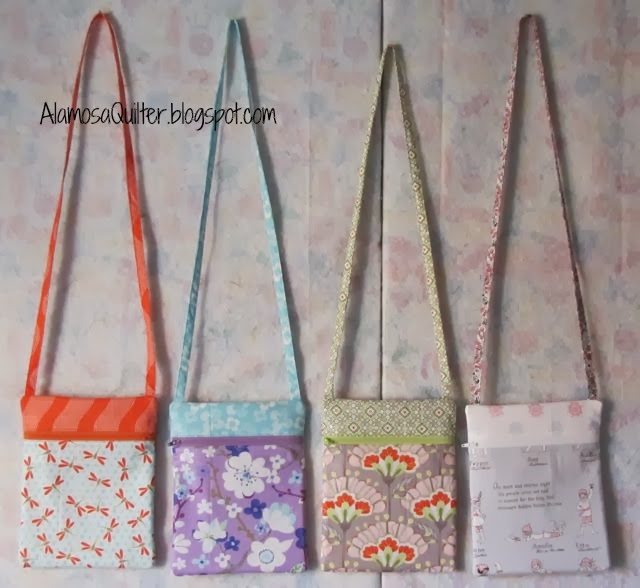 The one on the far right is MINE, made out of this adorable fabric. The other three will be gifts and a store sample.

I did a little shopping too. 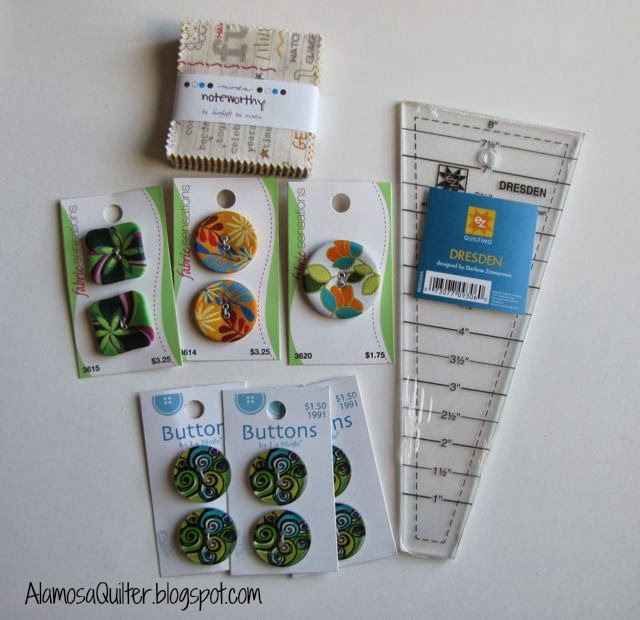 I didn't get as much accomplished as I would have liked, but I never do. It is a lot of work to pack up my sewing room, drive for a little over an hour and then unpack everything only to have to do it again two days later, but worth the effort. We sewed and laughed and sewed and ate and sewed. Our next retreat will be the last weekend in February. I'll sign up and pay next month at guild.

All that remains is for me to wash it, box it and mail it. That won't happen until next week though. 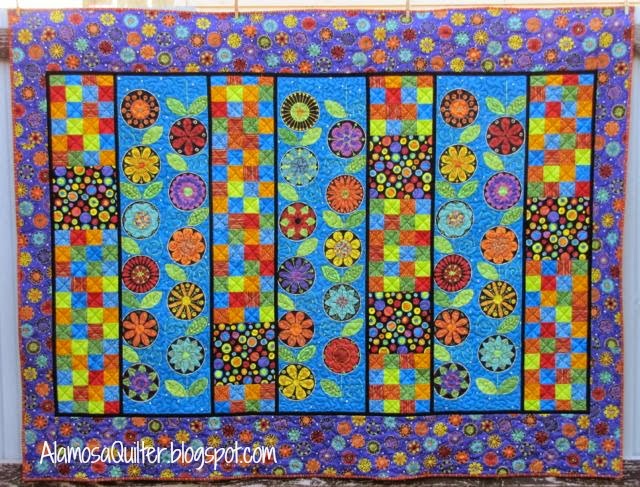 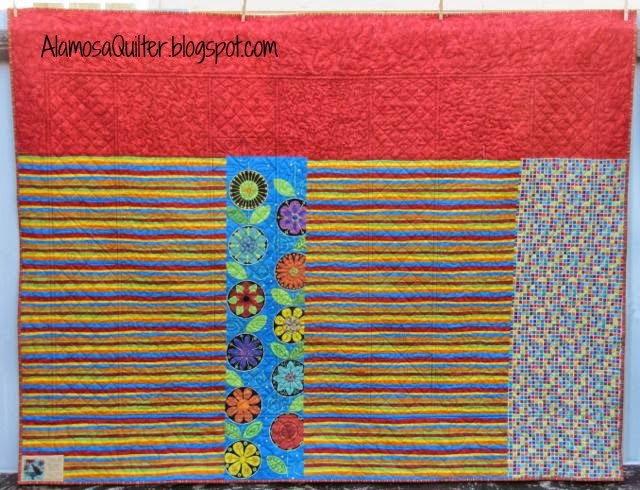 Most of my sewing time this week is being spent getting ready for my guild retreat this weekend.

I have a tub of strings that I will use for an upcoming class sample. 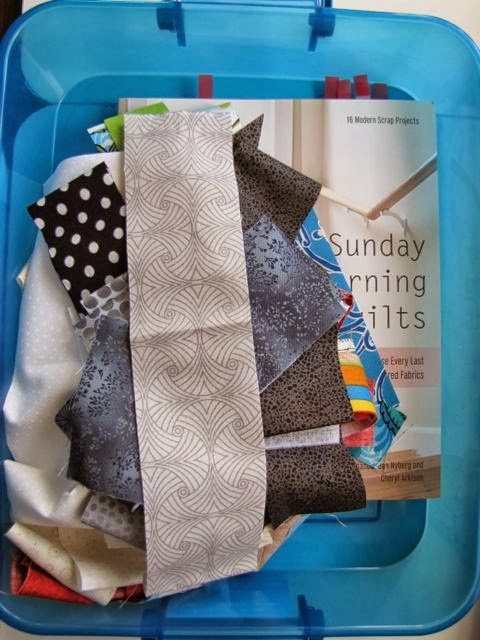 I have a tub of 4" squares that will turn into my scrap group project for next month. 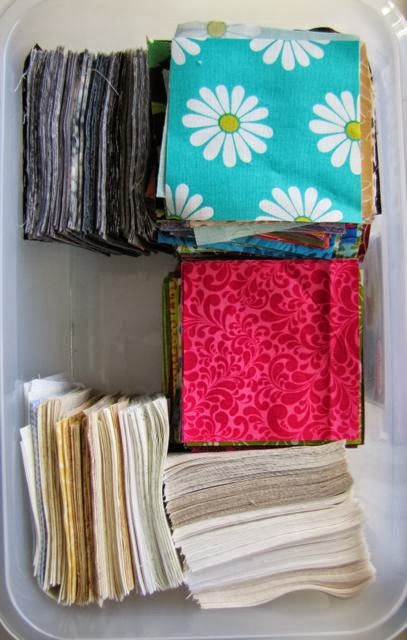 At the moment I have four projects in tubs ready to go to retreat, the two above plus two more. 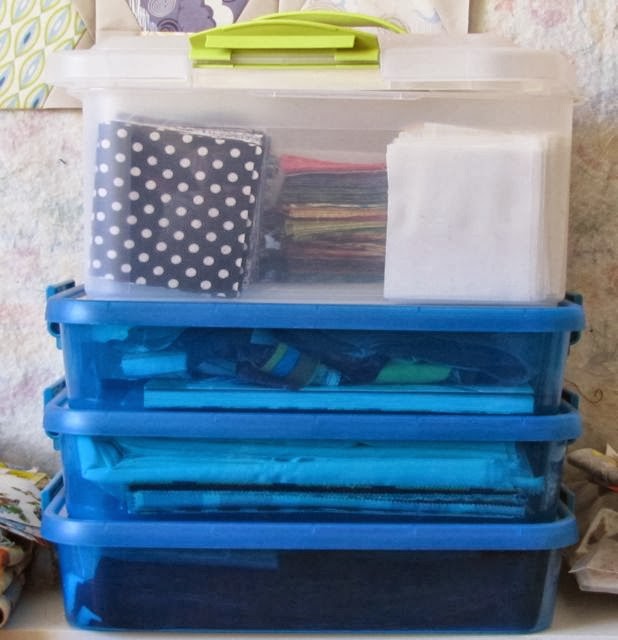 In addition to these four projects, I have two charity quilts sent to me by my mom. I plan to complete at least one of these. I also have some smaller, quick and easy projects on my list - some Little Wallets and some Runaround Bags. Click here to see photos of a Little Wallet and Runaround Bag I made previously.

The last couple of evenings have been spent sewing binding on this quilt. 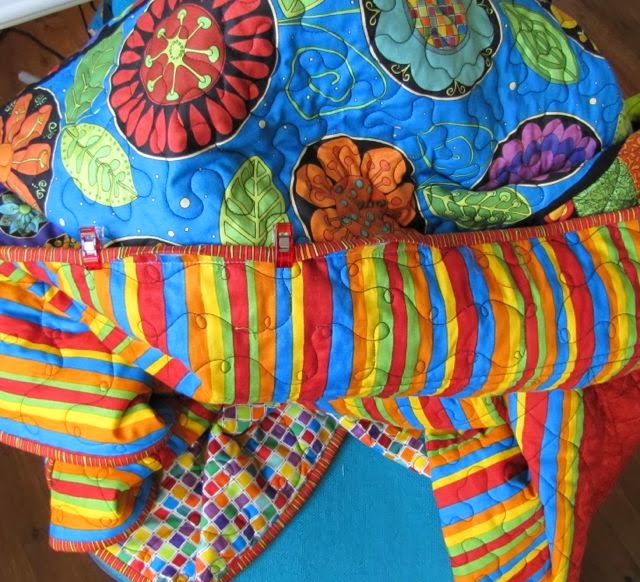 I'm on the last side!

I'm trying to finish up a quilt that I plan to give as a gift.

I shared the finished the top back in early August. Here is a reminder of what it looks like. 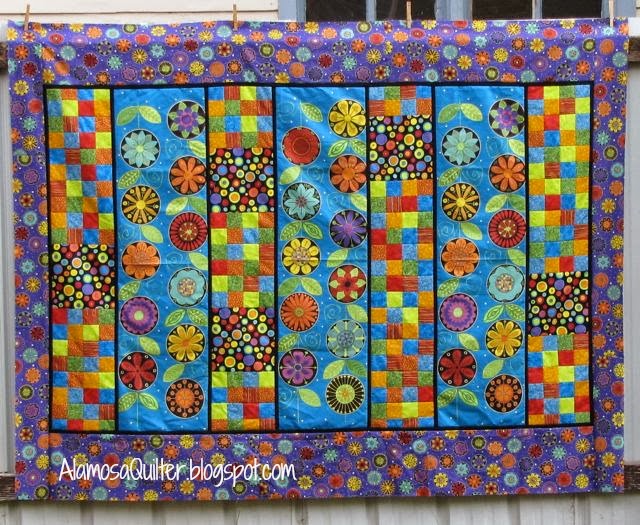 I'm quilting X's in the small squares. Doing a large X in the large black background squares and then doing my favorite triangle filler. I called it a "fleur de Lynn." 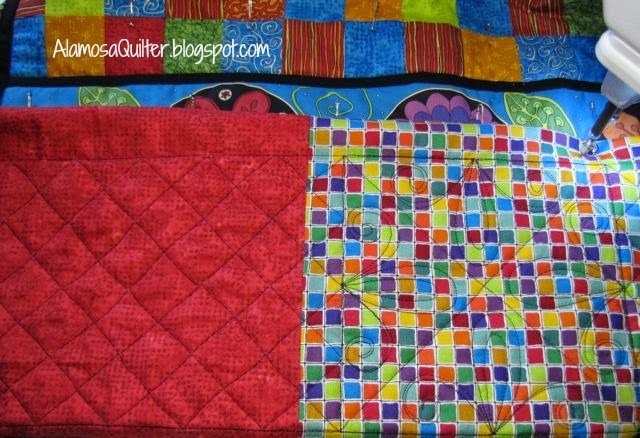 The photo above shows the quilting from the back because it shows up better. I haven't decided how I will quilt the rest. Hopefully something will occur to me before I finish with the sections of squares.

I want to finish the quilting this weekend and get it labeled and bound next week. Then I can get it in the mail and to the recipient before November 1st. 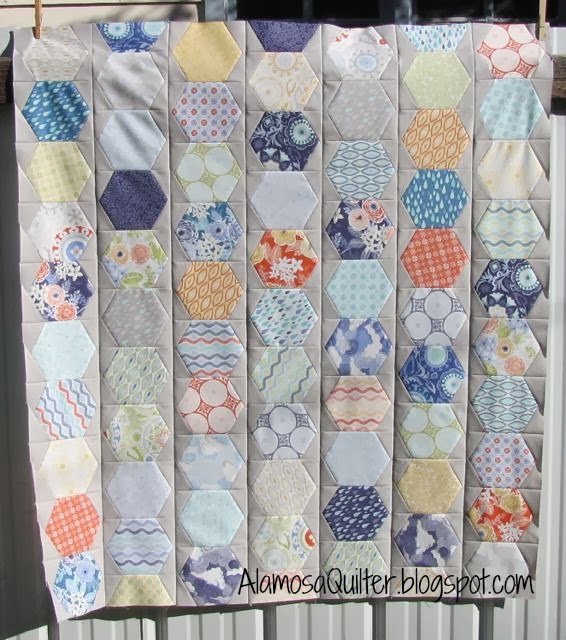 This is a Hexa-Chevragon quilt. I got the idea from the Crafty Fox blog. She cut her own hexagons. I used two packs of Honeycombs. I used her basic idea but had to figure out the measurements since my pre-cut hexagons must be a different size than the ones she cut.

My top is approximately 43" by 49". I have a few hexagons left over. The plan is to use them on the back. The fabric line is by Kate Spain for Moda, Sunnyside. The solid is Kona Ash.

Email ThisBlogThis!Share to TwitterShare to FacebookShare to Pinterest
Labels: H and H, hexagon

A Finish for Friday

My Impromptu girl version is finished! 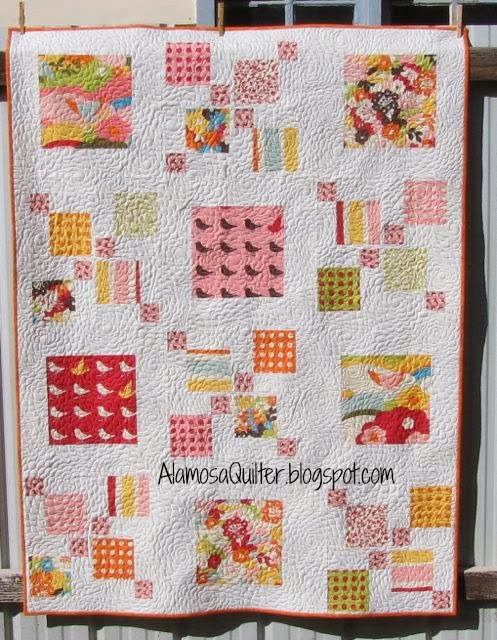 I used my version of the Flower Design from the book Free Motion Quilting with Angela Waters, pages 67 and 68.

For the back I used some floral fabrics from my stash. 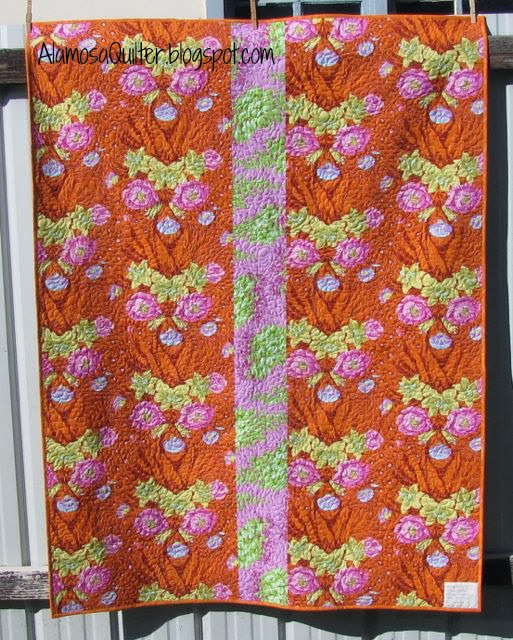 The finished quilt measures 47" by 62". I hope to make the boy version of this quilt at my upcoming retreat at the end of the month. I've had all the squares picked out and the backing fabric ready to go for a couple of months now.

The pattern is Impromptu by Rachel Griffin. My brief review of the pattern along with the link to Rachel's online store can be found by following this link.

I've been cutting tumbler blocks from scraps for several months and recently started sewing them together as a Leader and Ender project.

Right now I'm sewing 20 tumblers per row, but I may make the rows longer if I have enough tumblers cut. At the moment, each row measures about 41" long and 4" high. I have no plan for this project and no completion deadline.

Email ThisBlogThis!Share to TwitterShare to FacebookShare to Pinterest
Labels: scraps

Dance By the Light of the Moon Progress

The top panel is finished!

There are two more embroidery panels to make for this quilt. I may have to put this aside for a while though because Crabapple Hill has come out with a new, really cute Christmas Block of the Month, Gingerbread Square. The link will take you to the Crabapple Hill website where you can view the whole quilt as well as a close-up of each of the nine blocks. I already have the pattern and the floss kit.

I love making large quilts and involved projects but sometimes I'm in the mood for a project that I can finish in an afternoon. I made up two such projects over the weekend.

First up is this Runaround Bag.


Two fat quarters, a zipper, some fusible web and an uninterrupted hour is all it takes to make one. These would make great gifts!

Second is the Little Wallet. 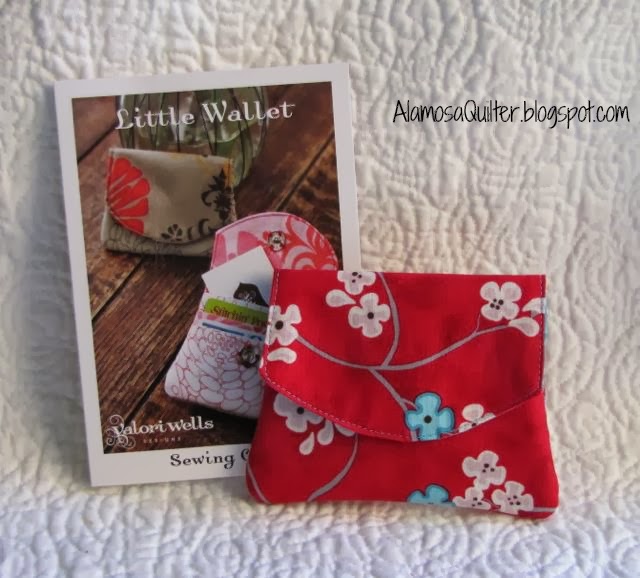 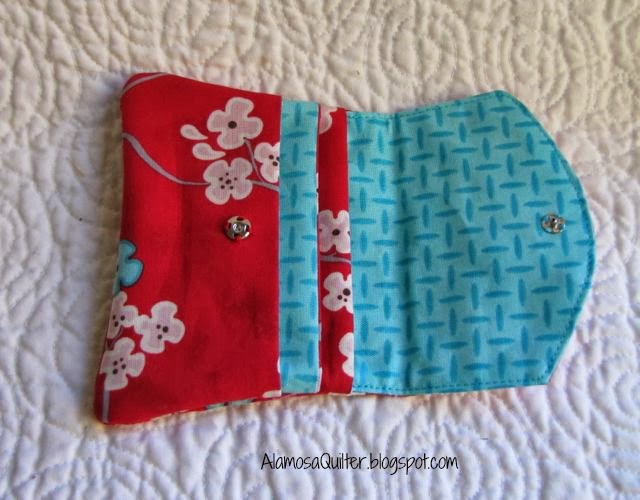 Again, quick and easy to make. This one is hanging out at my LQS as a store sample since we got in several copies of the pattern recently.

Hoping to Have a Finish by Friday

I'm quilting my Impromptu quilt. The link will take you to my post showing the finished top along with the pattern information. 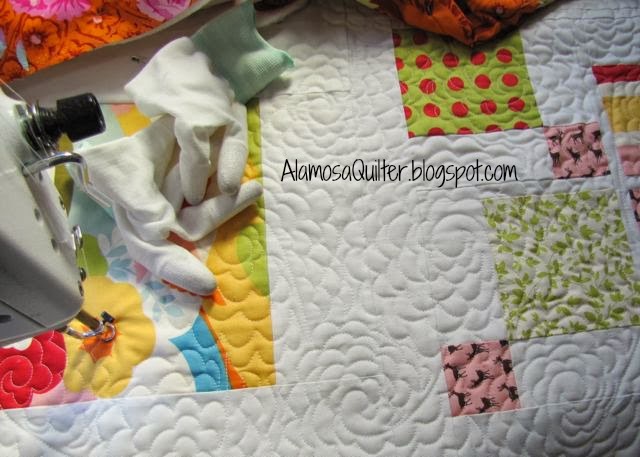 I love the migrating geese border! 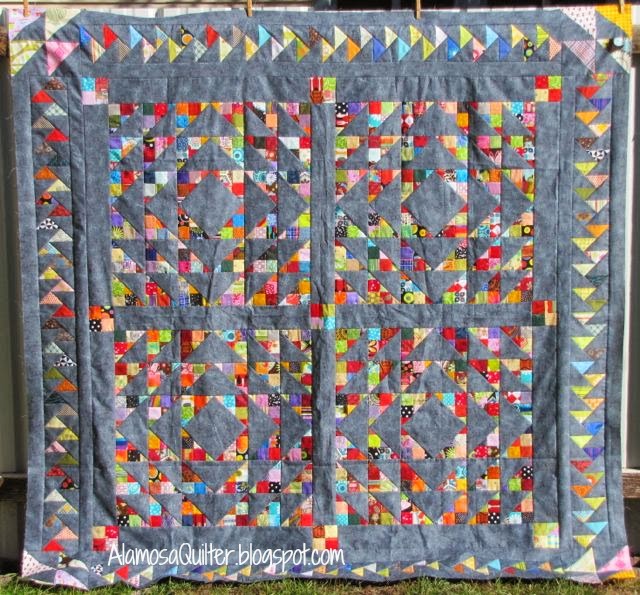 I will definitely use this technique again.

Email ThisBlogThis!Share to TwitterShare to FacebookShare to Pinterest
Labels: H and H, scraps

I finally committed to doing one of these in time to sign up! 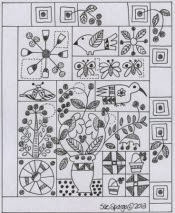 Above is the Sue Spargo Block of the Month project for 2014. The link will take you to her website where you can read the details. This is not an inexpensive quickie project!

Space is limited. If you want to join me in doing this next year, don't wait too long to sign up. I've waited in the past, trying to decide if I was ready to commit to such an involved project, only to decide too late that I wanted to join and there was no space left. I wasn't crazy about the 2013 project so didn't sign up, but I really like this one and have already reserved my spot. I didn't even add everything up to see how much this was going to cost me. I'm not sure I really want to know!