This is a fairly long post. I am trying to be as clear as possible with photos of each step. The first one took me about 30 minutes to make, but now I am making one in about 20 minutes. You will be cutting out four at a time with these instructions.

What you will need: 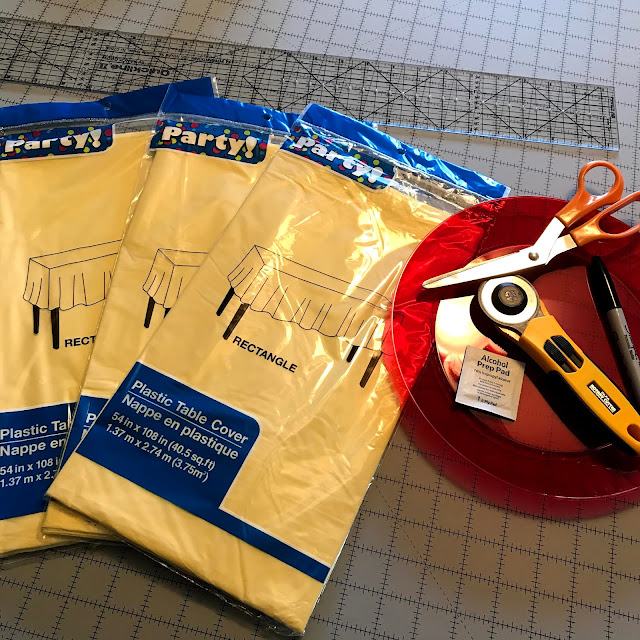 Three 54" by 108" plastic table cloths from the dollar store will make FOUR gowns if you cut them out in the way I will describe. Other things you need are a dinner plate, scissors and/or a rotary cutter, a ruler, a cutting mat (if using a rotary cutter), a Sharpie or other marker for marking (use a marker, not a pen or pencil as they will tear the table cloth), an alcohol prep pad (optional, but you will thank me later) and not pictured are WonderClips (photo below). DO NOT USE PINS! These table cloths are plastic. Pin holes will not heal like when you pin fabric. If you don't have any clips, a little dab of glue used in strategic places can help. This plastic stuff is slippy. Whatever needle you have in your machine right now will work just fine. 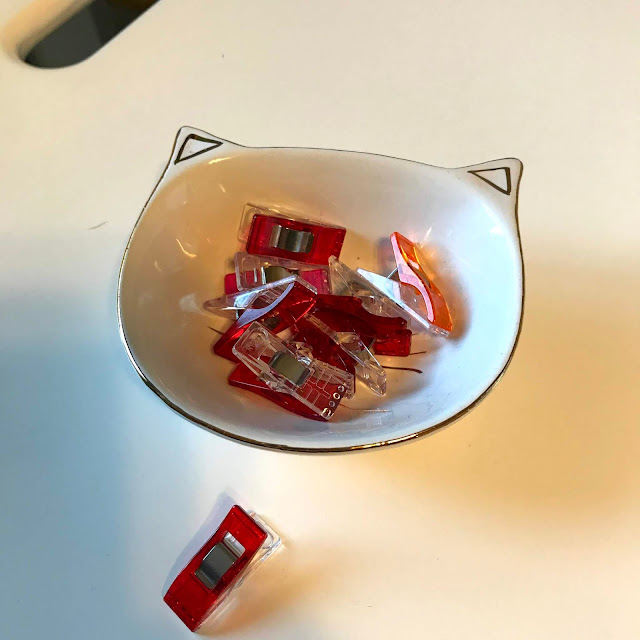 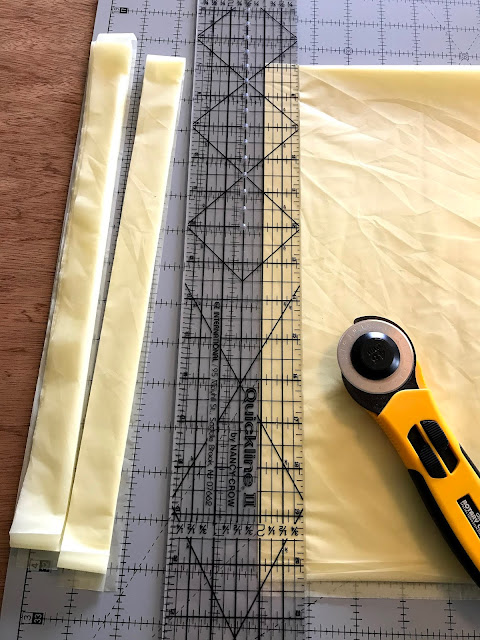 Using your ruler and rotary cutter, cut three 1" by 54" long strips from one of the short sides. Do not worry if these are not exactly 1" wide. Set these aside as they are the waste and neck ties for your gowns.

Unfold the gown bodies back out. They should be 27" by 51" (because you cut 3" off for the ties). I found it easiest to use the cut edge as the top of the gown since you cut the edge evenly in the last step. 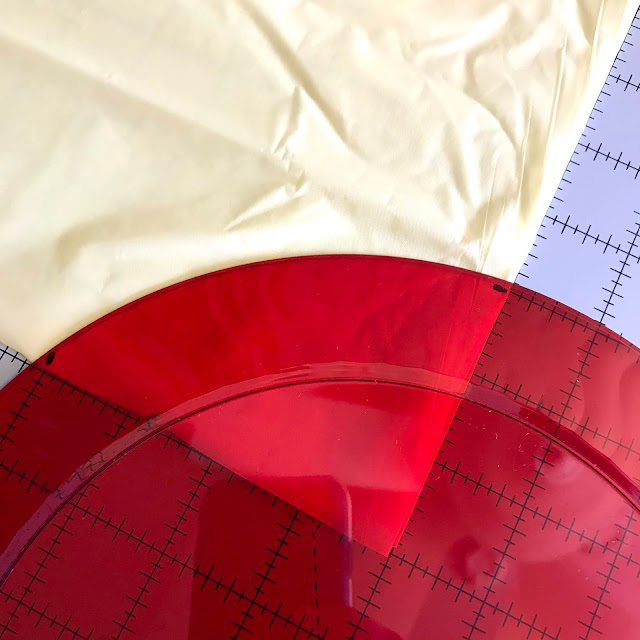 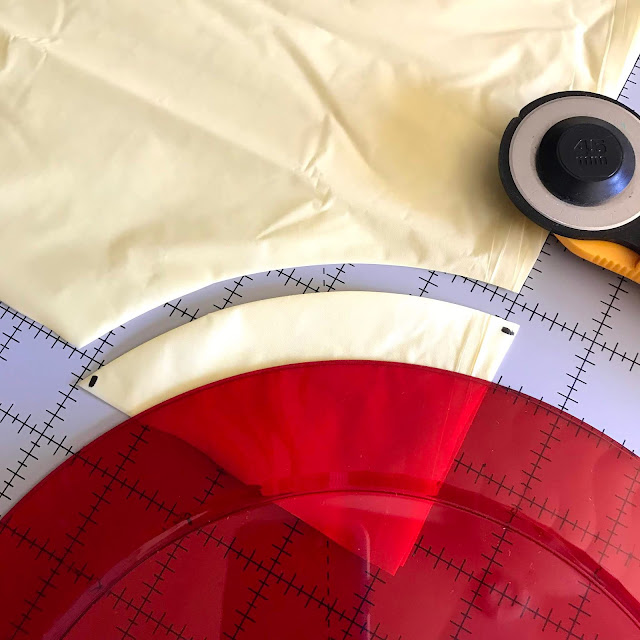 Along the center fold, measure 17" down from the center of the neck scoop and make a small mark. 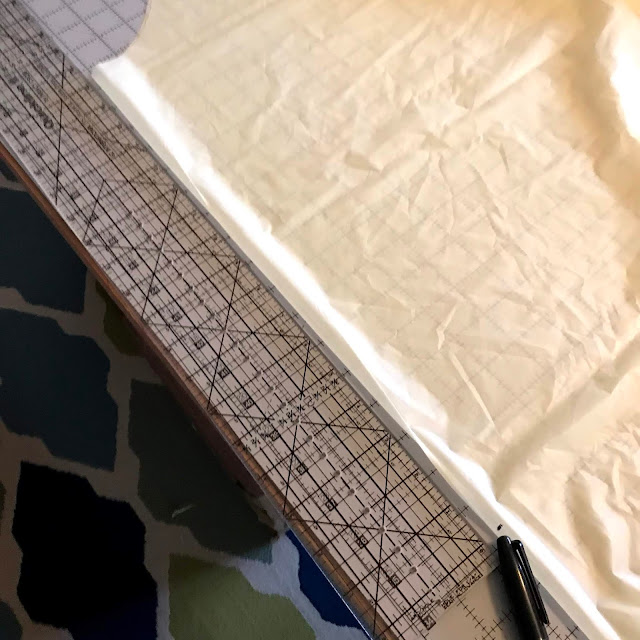 This mark is your placement mark for the waist ties. Make sure that you mark both of the gown bodies.

Open up your gown bodies and separate them. I did the next step separately for each gown body. Fold the gown body so that the two outer edges meet in the middle. 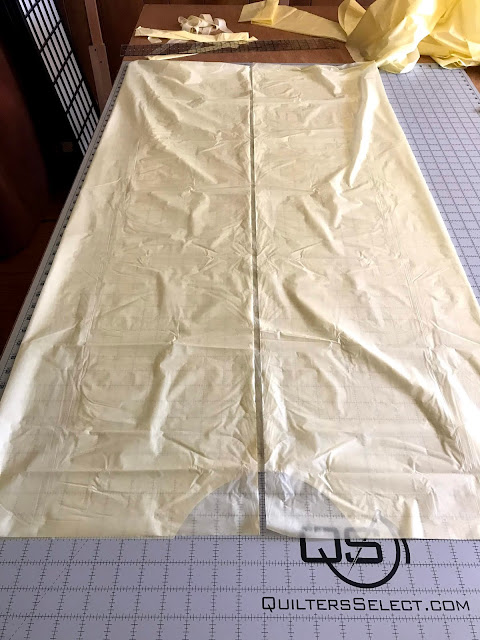 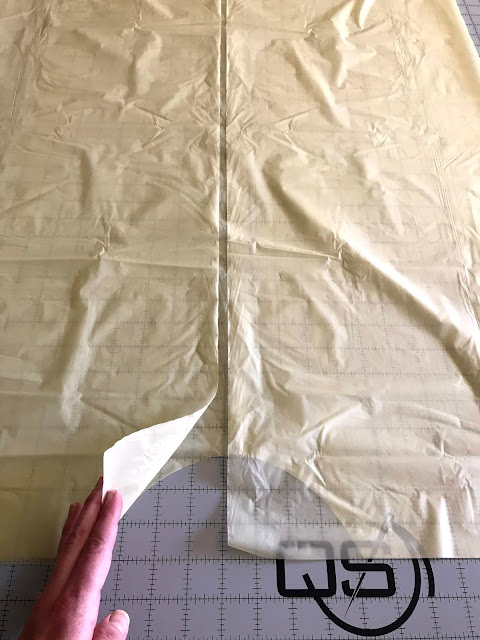 Measure 11" down along each outside folded edge and make a mark 11" from the top edge. 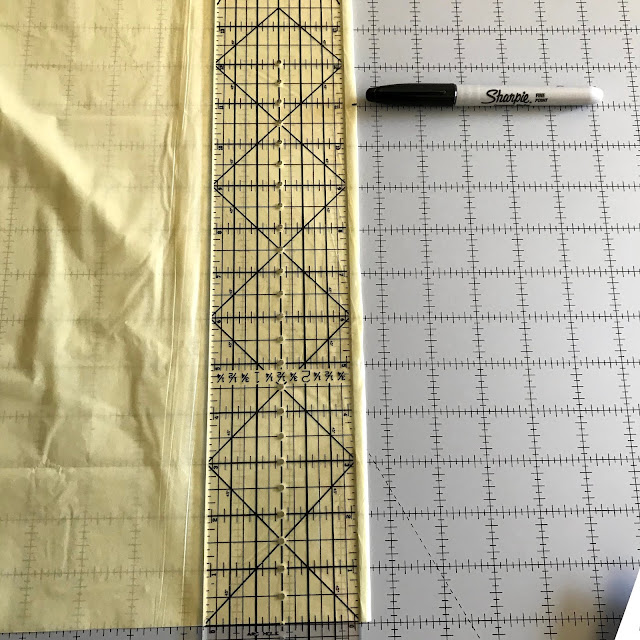 The marker is sitting at the 11" mark in the photo above. Using your scissors slit the table cloth from the top edge down to the mark. This should be an 11" long slit. Do this on both sides. These are the arm holes. 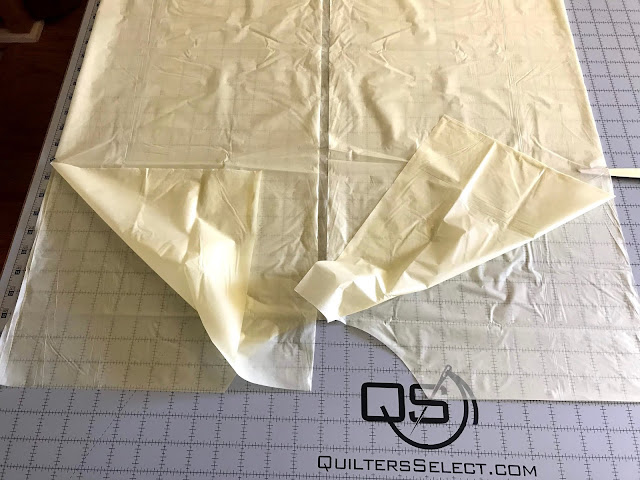 Repeat this process for the second table cloth. 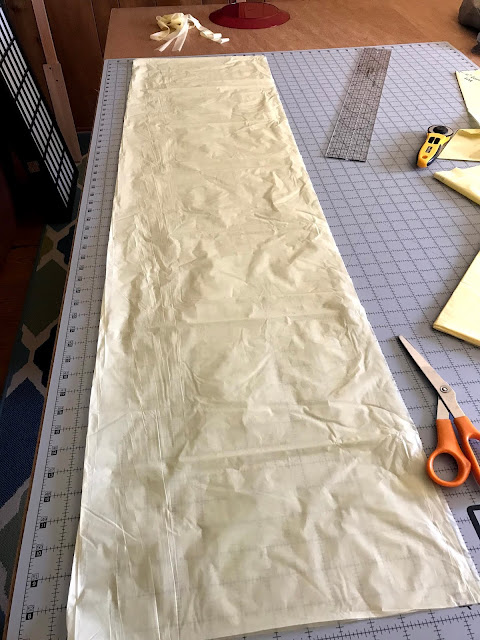 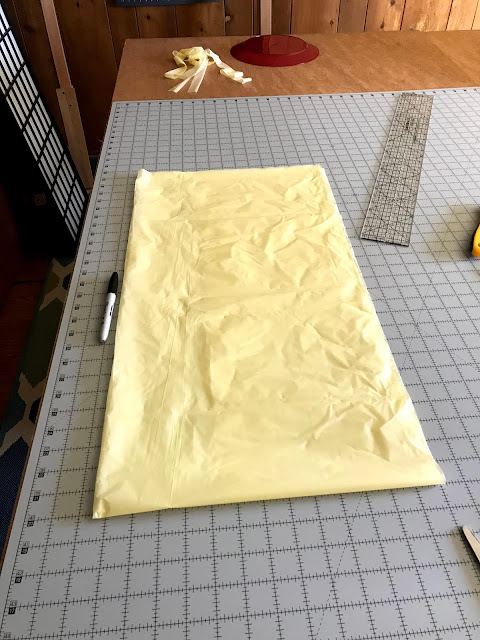 Get your marker and ruler so you can measure and mark to cut out the sleeves.

On one side, draw a line 11" up from the fold. Along the folded edge, measure over 20.5" from the drawn 11" long line and draw a 4.5" long line up from the fold. Then use your ruler to connect the tops of these two lines with a third line. Without moving anything, use your ruler and rotary cutter to cut on all three lines. If you don't have a rotary cutter and mat, pin all the layer together anywhere off the sleeve to hold everything together when you pick it up. Cut on all three lines. You just cut out two sleeves.

Now is where you may want to use that alcohol prep pad. I would wait until you are completely done with the marking. So if you are planning to make a few more gowns, wait until you have marked the last one before doing this. 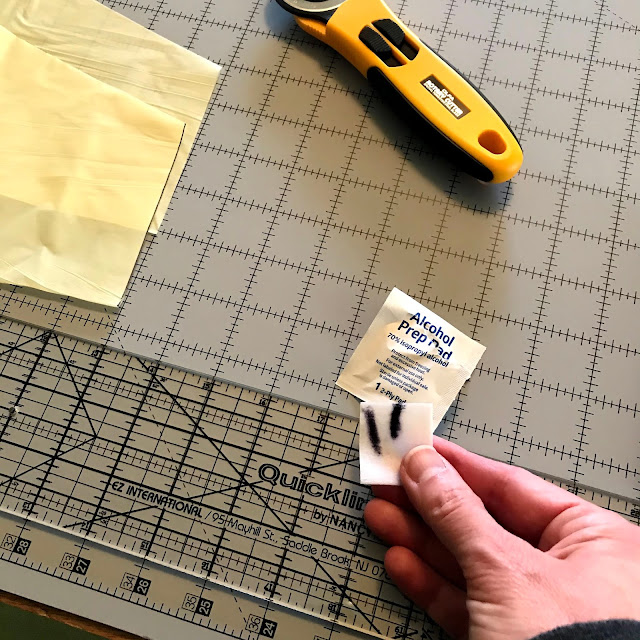 Run that alcohol pad along the edges of your ruler where you marked. See that black stuff on my alcohol pad? That is the excess marker coming off the ruler. You don't want that to get onto your fabric if you are using one of your good rulers for this project! Clean it off now so you don't forget and ruin the fabric you cut later!

Now take everything to your sewing machine. You will be using a 1/4" seam allowance, but don't stress about being super accurate. You don't want it to be less than 1/4" because this stuff will rip easily, but if your seam allowance is a little wider in places it won't make a bit of difference.

Increase your stitch length. The normal stitch length is too small. It will cause the plastic to rip easily along the seam. Below is a photo of the default stitch length setting on my machine, which is 2.5 (as are most machines these days). 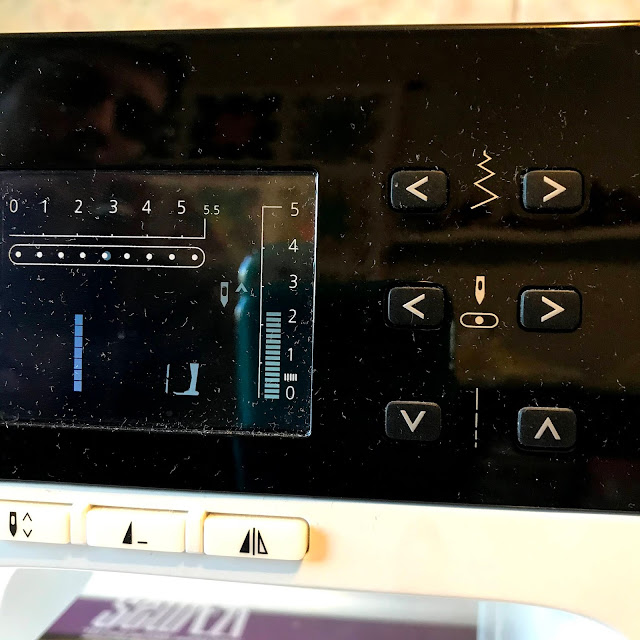 Increase that to about 4. 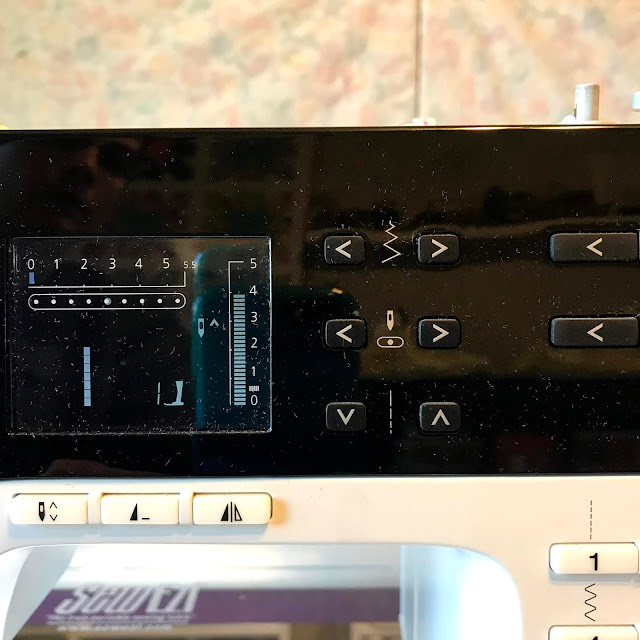 Start by taking a sleeve and the gown body. Match the folded edge of the sleeve to the end of the arm slit. Clip the two pieces together. Then match up the ends of the sleeve with the top of the gown and add a couple more clips to hold things in place. 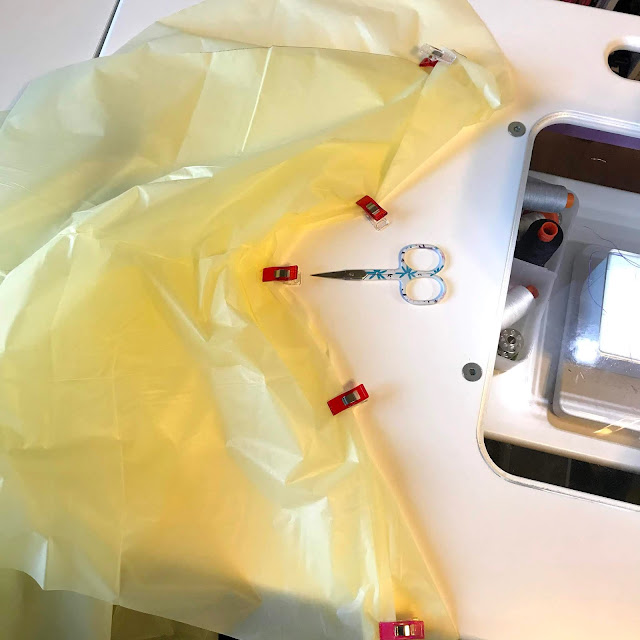 In the photo above, the scissors are pointing the end of the arm hole slit and the folded edge of the long side of the sleeve is clipped here. Sew the seam.

Match up the two ends of this seam and clip along the shoulder and length of the sleeve. 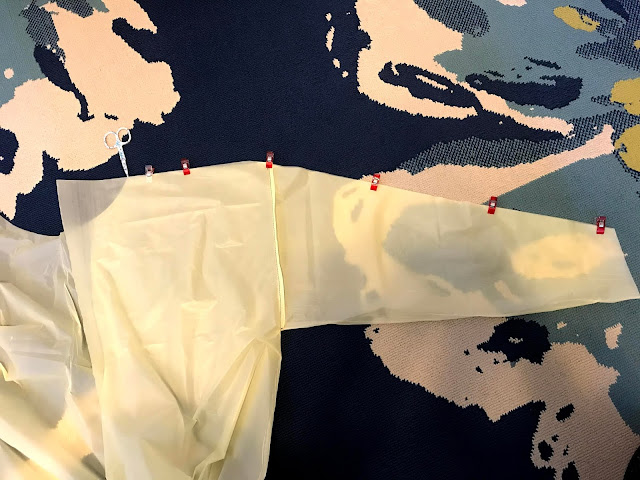 Notice that there is a little bit of the top edge that extends beyond the shoulder seam into the neck area. The scissors in the photo above point to the edge of the neck scoop. You want to start sewing a little before the end of the neck scoop. DO NOT BACKSTITCH! Backstitching will only cause the seam to rip. 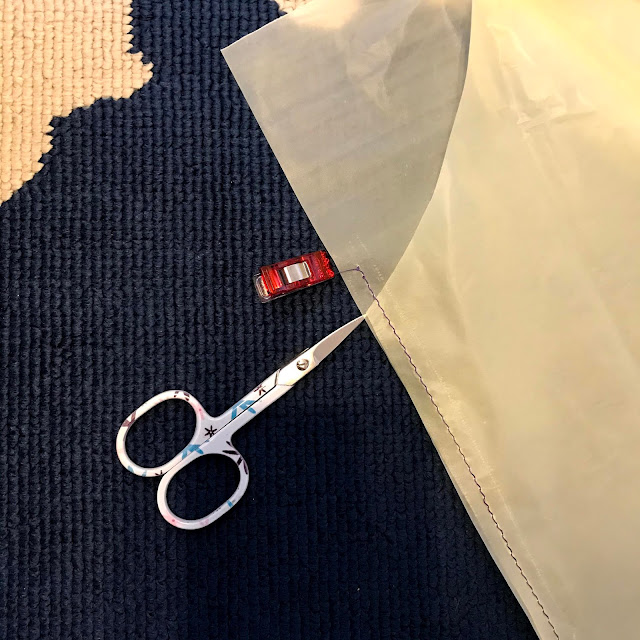 In the photo above you can see that I started sewing the seam at the clip and the scissors are pointing at the same place as the previous photo, where the neck scoop starts along the top edge of the gown. Since you can't backstitch at the start/end of the seam, this is the best thing we found to prevent the shoulder seam from ripping out when the gown is put on.

Repeat this process with the other sleeve. 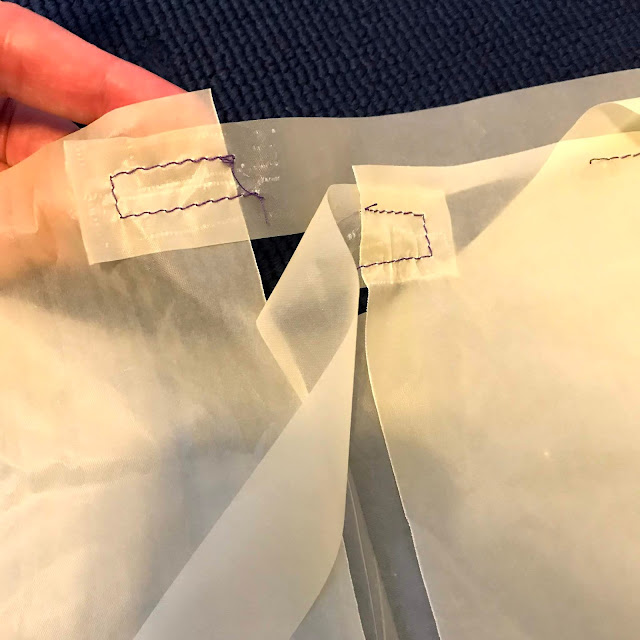 These go at the back of the gown at the top. In the photo above you can see the neck scoop underneath the ties. Overlap the ties with the gown body about 1" to 1.5" inches and sew them on. I stitched them on with a "U" pattern.

Carefully turn the gown right side out.

Find your mark that should be about 17" down from the neck right along the center fold of the gown. 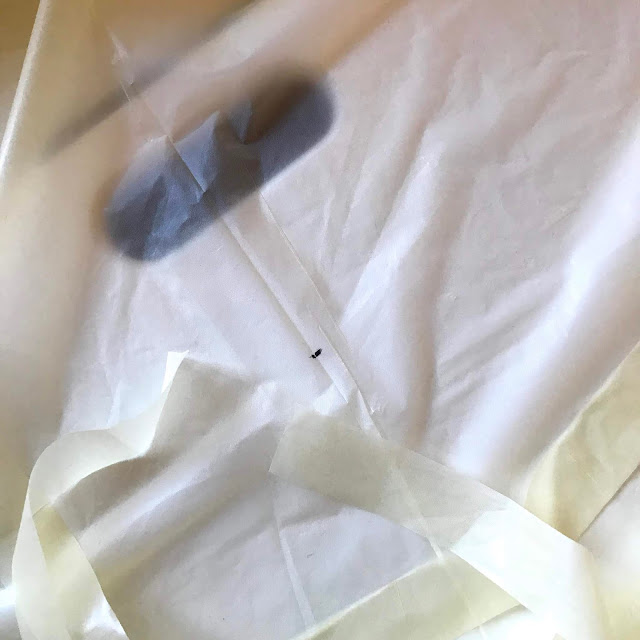 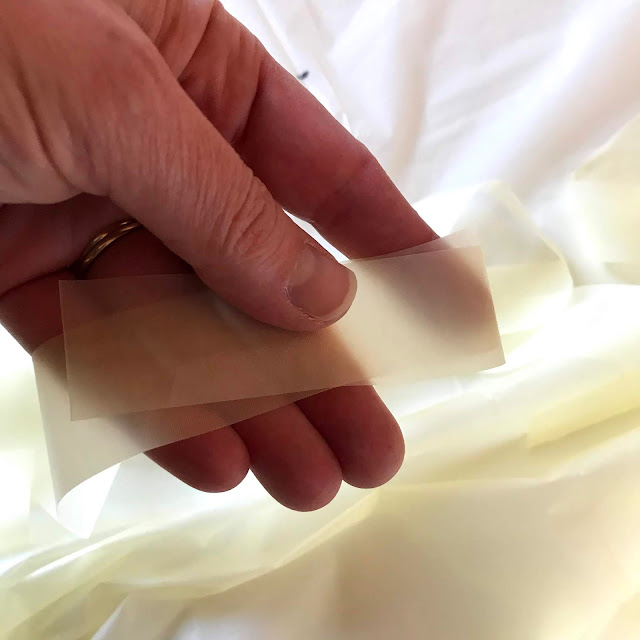 Center the overlap over the mark and stitch it in place with about 4" to 6" of stitching. 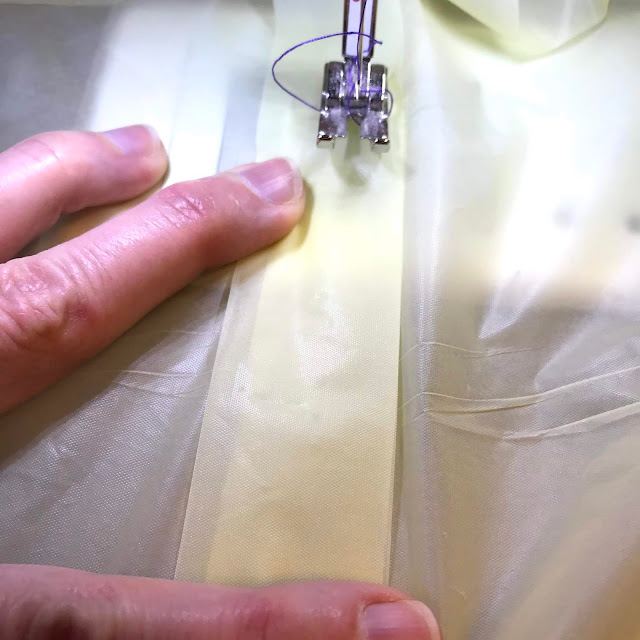 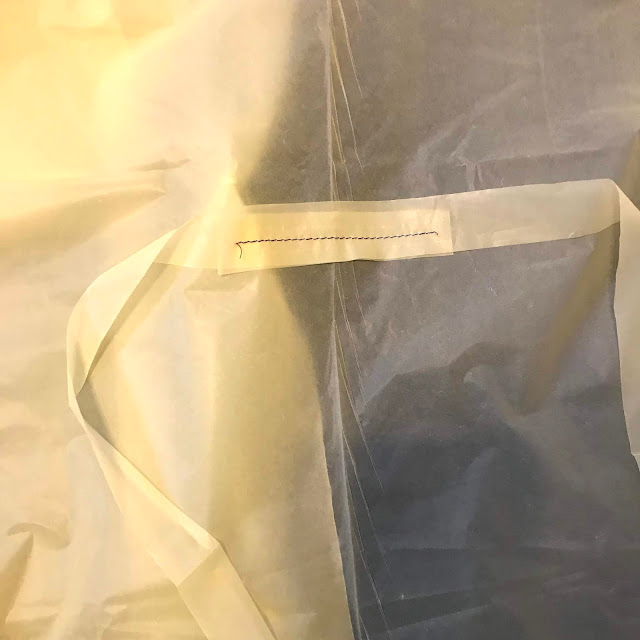 Neatly fold up your gown. Repeat for the other three gowns you have already cut out.

A big thank you is owed to one of my employees, Peg Collins, who helped me to deconstruct the gown I was given by the hospital and figure out how to turn a Dollar Tree plastic tablecloth into a disposable surgical gown! Thank you Peg!

Local folks, take your gowns to the SLV Health Foundation office located at 106 Blanca Ave. in Alamosa. The building is located on Main Street in front of the hospital between Blanca and Pike Avenues. Look for the glass door that says SLV Health Foundation. The door faces Arby's. There will be a box or tub or something for you to put them in just inside the door. If not, there should be someone there who will take them from you. Here is their contact information:

If you prefer to contact me privately, since the shop has been force to close for a bit, the quickest way would be to contact the shop through Facebook, search for Alamosa Quilt Company, and message me or email the shop directly, AlamosaQuiltCompany at gmail dot com. You could also call the shop at (719) 937-2555 and leave a voicemail message. I am checking the shop messages daily during the week.

Reusable isolation gowns canada are best for protection it's also known as medical gowns or hospital gowns this is also an important tool used by medical professionals to help protect themselves from potentially harmful fluid or solid material that could be carrying infectious pathogens. Proper use of isolation gowns not only help protect the medical professional, but also helps prevent them from carrying disease to another potential patient.